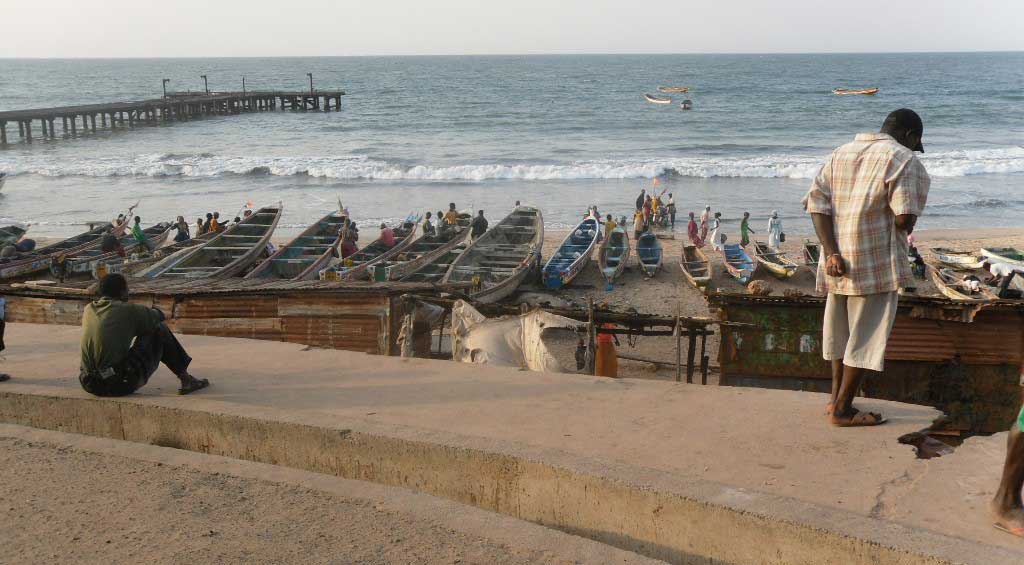 The Gambia (officially The Gambia or Republic of The Gambia) is a republic in West Africa, located on the banks of the Gambia River. With the exception of a short stretch of coastline at the mouth of the river into the Atlantic Ocean, The Gambia is completely surrounded by the state of Senegal. With a total area of about 11,000 square kilometres, the country is the smallest state on the African mainland. The Gambia has around 2.05 million inhabitants (as of July 2017). Its largest urban area is the Kombo-St. Mary Area, and its capital is Banjul.
The Gambia is a republic under President Adama Barrow. On 12 December 2015, then President Yahya Jammeh declared The Gambia an Islamic state. The young Lieutenant Jammeh came to power in 1994 through a military but largely bloodless coup d'état that arose out of a protest by soldiers over late payouts of soldiers' salaries. He announced at the time that he intended to rule alone until at least 1998. Nevertheless, elections were held again in 1996, from which Jammeh emerged as the clear winner. A new constitution was introduced in 1997.
In fact, the years from 1996 to 2000 were marked by a certain stability and economic upswing. In 2000, at least 14 people were killed in a street battle between student demonstrators and police, according to Amnesty International. Schools were temporarily closed, patrols dominated the cityscape at night.
On 16 December 2004, Deyda Hydara, a journalist critical of the government, was murdered. He had previously denounced the new media law, according to which journalists can be sentenced to at least six months in prison for writing a "defamatory article", such as defamation, publishing inflammatory articles. Four days after the crime, hundreds of journalists protested against Hydara's murder and for the preservation of press freedom.
In 2011, opponents of the regime in the diaspora, mainly in the US and the UK, founded the Coalition for Change, which sees itself as an opposition political and civil rights movement. One of the founders was the country's former Minister of Information, Amadou Scattred Janneh, who also holds US citizenship and worked in the US Embassy in The Gambia until his appointment as Minister in 2003. In 2011 he was imprisoned, but released in 2012 under pressure from American civil rights activists.
On 23 August 2012, nine political prisoners on death row were summarily shot. These were the first "official" executions in The Gambia in 30 years. Since 2014, there have been increasing reports of massive human rights violations, including torture, extrajudicial executions and the persecution of homosexuals. President Yahya Jammeh called homosexuals "vermin" who should be "killed like mosquitoes". He went on to say that they were "more dangerous than tsunamis and earthquakes" and that he would "cut the necks of homosexuals with his own hands". The EU and the USA froze their economic support programmes for Gambia.
In the presidential elections on 1 December 2016, President Yahya Jammeh was voted out of office after 22 years in office, having previously threatened the opposition with death. During the election campaign, there were numerous arrests and prison sentences.
After Jammeh refused to step down from office after the election, Senegalese troops, backed by Nigeria, were deployed to the Gambian border and were expected to overthrow him if he did not step down by midnight on 19 January 2017. Earlier, the United Nations Security Council had passed a resolution for the West African Economic Community (ECOWAS) to intervene in The Gambia. Adama Barrow was sworn in as the new president at the Gambian embassy in neighbouring Senegal on 19 January 2017. Senegalese troops invaded The Gambia on 19 January 2017. Gambia's Chief of General Staff Ousman Badjie previously spoke out against combat. He would not sacrifice the lives of his men for a political dispute. After the ultimatum expired, the neighbouring states launched a last attempt to negotiate with Jammeh on 20 January; Jammeh finally gave up and resigned as president of The Gambia.
On 21 January 2017, ex-President Jammeh left the country. The following week, Barrow returned to The Gambia and presented his cabinet, Adama Barrow, on 1 February.
In April 2017, Barrow's party, the United Democratic Party, won 31 of the 48 seats up for grabs, while Jammeh's Alliance for Patriotic Reorientation and Construction lost almost all of its mandates.
The Gambia is a member of various international organisations and groupings. Among the most important are the United Nations and its subsidiary and specialised agencies, the International Monetary Fund and the World Bank. At the regional level, the African Union and the Economic Community of West African States (ECOWAS) are the most important.
The Gambia has no mineral resources that could be developed economically - agriculture, tourism and fishing are the country's main industries. Exports - estimated at US$120 million in 2016 - in 2016 about 48 per cent went to China, about 27 per cent to India and just under 9 per cent to the United Kingdom. In the same year, 34 per cent of imports came from China. The country has a high trade deficit due to the low competitiveness of its domestic industry. In 2016, it amounted to almost 20 % of economic output. To cover its import needs, the country has to borrow heavily. In 2016, the national debt was 116 % of GDP, one of the highest in the world.
The most common natural disasters that threaten the country are bushfires, droughts, coastal erosion, floods, sandstorms and plagues of locusts.
Since the 1970s, drought disasters - along with bushfires - have become more frequent. Sandstorms lasting more than three days have occurred almost annually since the mid-1980s. In the last 20 years, large stretches of coastline between Banjul and Tanji have been damaged by erosion during storm surges, with significant losses of property as well. Recently, river floods have become an annual occurrence, damaging fields and buildings in many parts of the country. In 2004, the entire West African region was fighting a huge population of locusts. The Gambian government therefore declared a state of emergency as a precaution.
Expansion of arable land, overgrazing by livestock, bushfires and unauthorised logging have reduced the forest cover from about 70 percent in the 1960s to less than nine percent in 2000.

We use cookies on our website. Some of them are essential for the operation of the site, while others help us to improve this site and the user experience (tracking cookies). You can decide for yourself whether you want to allow cookies or not. Please note that if you reject them, you may not be able to use all the functionalities of the site.